Muhammadi Trust has now published the English translation of

The Battle of the Camel

a book authored by Shaykh Al-Mufid

(Please go to the last page on Publications webpage on this website to order your copy.) 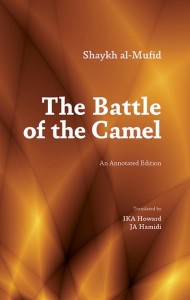 ‘Shaykh al-Mufîd (d. 413/1022), one of the major figures in the development of the Shi’i scholarly tradition, is best known for his Kitâb al-Irshâd, an account  of the lives of the Imams of the Ahl al-Bayt. Particularly important among his other works is his al-Jamal wa ‘n-Nusra, an account of the Battle of the Camel and the events leading up to it including also  a delineation of the positions adopted by various groups and schools of thought. Readers to whom the Arabic original is inaccessible now have a serviceable translation of this valuable work at their disposal.’

A Word from the Author

‘This is a summary of the accounts of [the Battle of] Basra, the reason for the civil discord there and the doctrines of the theoreticians in judging the civil discord there.  We have reported them with brevity. The reports which we have presented are on the authority of the non-Shī‘a narrators to the exclusion of the Shī‘a narrators. Moreover, we have not recorded what the Shī‘a report in their repudiation of them since the purpose of our presentation of this book was to detail the account of the civil discord at Basra, the fighting and actions which took place there, to explain the obstinacy of the people towards the Commander of the Faithful and that their intention in fighting him was to shed his blood without there being any doubt in his affair and any excuse for the opposition they made against him. The purpose is also to elucidate what the reports have implied of the fallacy of the view of those who claim that the people repented from their transgression, their error in waging war against the Commander of the Faithful and the invalidity of the doctrine of those of the Mu‘tazila, the Murji’a and the Ḥashwīyya who hold such a position.’

Abu Abdullah Muhammad al-Harithi al-Baghdadi, known as al-Shaykh al-Mufid (d. 413/1022) is one of the foremost figures of Shi‘a history.
A student of Ibn Babuyah al-Qummi – the great teacher of jurisprudence, the science of traditions (hadith) and theology in the 4th/10th century – Shaykh al-Mufid was in turn the teacher of celebrated Shi‘a theologians such as al-Shaykh al-Murtada.
The author of some 170 treatises concerned almost completely with theology, jurisprudence and hadith, Shaykh al-Mufid soon became one of the main figures of the Shi‘a scholarly tradition, and his works came to occupy a privileged position in the traditional schools of Shi‘a learning.
Over the centuries his writings have continued to enjoy great prominence in scholarly circles and also popularity. To this day his writings remain – along with those of his teacher Ibn Babuyah, al-Kulayni, and Shaykh Muhammad al-Tusi – the core of the theological and juridical curricula of Shi‘a seminaries.

Background to This Work

Many years ago, the Muhammadi Trust entrusted the late Dr Ian Keith Anderson Howard, a distinguished scholar of Islamic studies, with the task of translating The Battle of the Camel. The Trust had earlier assigned two works to be translated by Dr Howard: Shaykh al-Mufid’s The Book of Guidance and Sulayman Kattani’s work entitled Imam Ali: A Beacon of Courage.
The two titles are among the most important works that the Trust has published in its four decades of existence. The Trust is deeply indebted to the late Dr Howard for his contribution to the Shi‘a scholarship.

Over the past three years, the incomplete manuscript of the late Dr Howard has been edited and further annotated by Mr Hamidi.  Because Mr Hamidi was privileged to have access to the most recent edition of the original in Arabic, he proceeded to translate sections that were left out in the Dr Howard’s version.  It is of note that the first 20 annotations were written by the late Dr Howard.